How to Record the Guitar to a Computer | Simple Guide 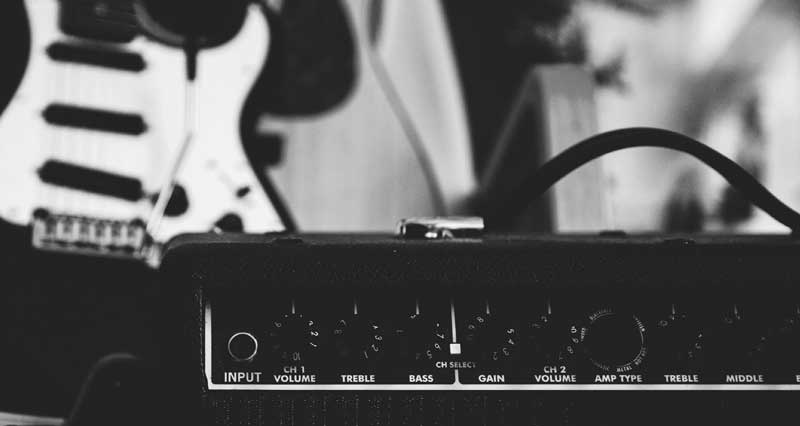 If you’re a guitar player, at some point you’ll want to record your guitar straight to your PC or MAC computer.

If you’ve never done this before, it’s a lot simpler than you think. You’ll likely have everything you need to record your guitar to a computer if you already play either an acoustic or electric guitar. If not, the extra devices shouldn’t cost much.

Now all you need are a couple of straightforward tips, and you’re off to recording music to your computer like the pros.

So how do you record a guitar to a computer? The simple step by step guide to recording a guitar to computer is:

You may need the following pieces of equipment to record a guitar on a PC or MAC computer. It all depends on how complicated you want to make it.

The interface is what allows you to connect the instrument to your computer.

The microphone isn’t a necessity but it’s good to have, especially with an acoustic guitar.

The DAW is essentially the software that you need to do the recording and the plugins work with the DAW to do what you need it to do.

Finally, although monitors and headphones aren’t required because you could use the computer speakers instead, they make a big difference in the overall sound of the recording.

How to Record Electric Guitar

To learn how to record the guitar to a PC or Mac, follow the options below:

1. Use an Audio Interface to Record to the Instrument Input

To do this, just connect the audio interface to your computer and your guitar to the interface’s input.

An audio interface is an electronic piece of hardware designed to transform the analog sound produced by your instrument into digital signals and visa versa.

One word of warning: the sound will likely be different than what you expected it to be. To change this, use various plug-ins to enhance the dry signal from your guitar.

Even after you’ve finished with the recording, you can change the sound of your guitar by using assorted FX and amp simulators that are easily found online.

Follow the “pattern” above to record your guitar on your electronic device. Plug the guitar into the amp, then connect the line output on the amp into the audio interface’s line input.

If you love the sound of the amp, but you don’t really feel like hooking the mic up to the speaker, this is a very practical option..

With this method, you’ll have to tweak the amp, the interface, and your guitar. Also, you should start by setting the volume on the lowest setting and work up from there.

3. Use an Amp Simulator

This method involves hooking up the guitar to an amp simulator, then the simulator to the instrument input.

You’ll get an even better sound if you run your guitar through one of your effects pedals, and in this case you would connect the pedal’s output to the instrument input of your audio interface.

The disadvantage to this method is that after you record, it’s nearly impossible to change and improve the sound of the guitar.

4. Using the USB Interface to Record From Your Guitar

With this method, you’ll need a guitar to USB interface for it to work. Although this technique isn’t likely to get critic reviews that are as good as the audio interface method, the guitar to USB method is a lot less expensive and good for musicians on a budget.

You also won’t be able to add vocals or other instruments at any time, unless you decide to use a USB mixer or your standard audio interface. However, this is definitely a fast and simple solution worth considering.

5. Use a Microphone to Record the Sound of the Amp

Okay, this is an old standby method, but it works every time. For the best results, make sure the microphone is placed 2 to 12 inches from the cabinet, and point the mic toward the center of one of your amp speakers. You have two mic options with this method.

The first is a Dynamic mic, and the easiest way to work with it is to purchase a recording studio package with the software, interface, mic, XLR lead, and headphones in the package.

Finally, you can combine any of the methods above with a portable digital recorder, and one of the main benefits is that you won’t need to have your computer connected or even turned on to make it work.

After you record, you can simply transfer the recording into your recording software, and you can do this at any time.

How to Record Acoustic Guitar

1. Use an Audio Interface and Record with a Large-Diaphragm Condenser Mic

With this option, you’ll have to experiment with the mic to determine what position will work best, and you should start with the mic set up roughly three feet from the guitar while pointing it right at the sound hole.

If that doesn’t work, just point it toward the neck of the instrument.

With acoustic guitars, keep in mind that the room you’re in has an effect on the overall sound and some form of acoustic treatment may be needed.

2. Method for Those on a Budget: Record with a USB Microphone

With a USB microphone, you’ll need nothing else to record your guitar, not even a need to connect guitar to computer.

There will be no other equipment, no audio interface, and so on. This is because everything you need is included in the microphone. Simply plugin the mic to your computer and position it in front of the guitar sound hole.

You get a decent recording at a great price, and a USB mic is convenient to own even if you purchase other equipment later on.

3. Use an Audio Interface to Record From the Guitar Output

With this method, you’ll record from the guitar output directly into the instrument input on the audio interface.

It offers the advantage of being able to record just about anywhere, but the disadvantage of producing a “dry” sound and a less-detailed sound overall.

You’ll need recording software and a guitar lead with this method.

This is also assuming you have acoustic/electric guitar with an 1/4″ output.

An Acoustic/Electric guitar is a regular acoustic guitar with a pickup installed in it. A pickup is a device that amplifies the acoustic sound of your guitar into an electrical signal.

Overview of Guitar to Computer

If you want a very simple connection, you can plug your guitar directly into the computer using guitar to USB cables, and the best part about this method is that it works for both electric and acoustic guitars.

It also allows you to add effects and get better results than using your computer’s generic line-in.

With many of the above methods, learning how to record the guitar to a PC or Mac product can involve combining two of the techniques to get the right sound.

Your budget will affect which method you choose, as well the items you already own, such as the audio interface, USB interface, microphones, and so on.

If you plan to record additional instruments later on, including piano, drums, or even voice, you’ll need an audio interface with multiple outputs. Check out our audio interface post for more information.

Remember that the Mac computers may only be compatible with certain interfaces so make sure that you get one specifically made for your computer.

Sometimes, amps and multi-effect units will have the ability to work as an interface, which allows you to plug in your guitar-to-USB interface and record that way.

If you look at your amp and see a USB port, just plug it into your computer and you should be all set.

Other Parts of the Process

You can think of your DAW, or digital audio workstation, as a complete recording studio in a software package.

If you look at those giant mixing boards found in a typical recording studio, that is essentially what a DAW offers you in a much smaller version.

Naturally, there are different brands; in fact, they may feel a little overwhelming at first but you don’t need to be intimidated by them because they really are much easier to operate than you think.

If you’re planning to plug your guitar right to your audio interface you won’t need a microphone. However, if you plan on recording any other instruments or vocals, you’ll will.

An audio interface that has an input specifically for microphones will also be needed.

When looking for monitors and headphones for your recording, make sure that you get ones labeled “studio” versions; otherwise, the sound will be a little overbearing and not what you expected it to be.

If you already have a good set of headphones, there’s likely no need to replace them.

Your Plugins Are Important

You can do more than just connecting a guitar to a computer to get the right sound when recording and your plugins can be an important part of the process.

Once your DAW and audio interface are set up, you have to connect the amp to the interface because if you don’t, you’ll get a “dry” sound that isn’t a realistic sound.

Your plugins allow you to get the guitar sound that you want.

Most experts recommend VST plugins, which many lite or artist versions may not have. Also, your DAW has to accommodate VST plugins in order for this to work the way it should.

You Can Record Several Different Ways

There are several different ways you can perfect recording your guitar onto your computer than the ones mentioned above.

These include the following:

Remember, if you decide to use your guitar signal dry because you want to add other instruments later on, all you do is run a cable from your guitar straight into the computer.

This works only if you have an output.

If you haven’t bought your guitar yet, try to look for one that has a built-in USB output so the guitar-to-USB cables option is practical. Their are ample options to choose from.

Enjoy the process and keep perfecting your sound. You’ll be blown away how crazy good you feel when hearing you music played back.

We participates in various affiliate marketing programs, which means we may get paid commissions on products purchased through our links.