Easiest Instrument to Play & Best to Learn On 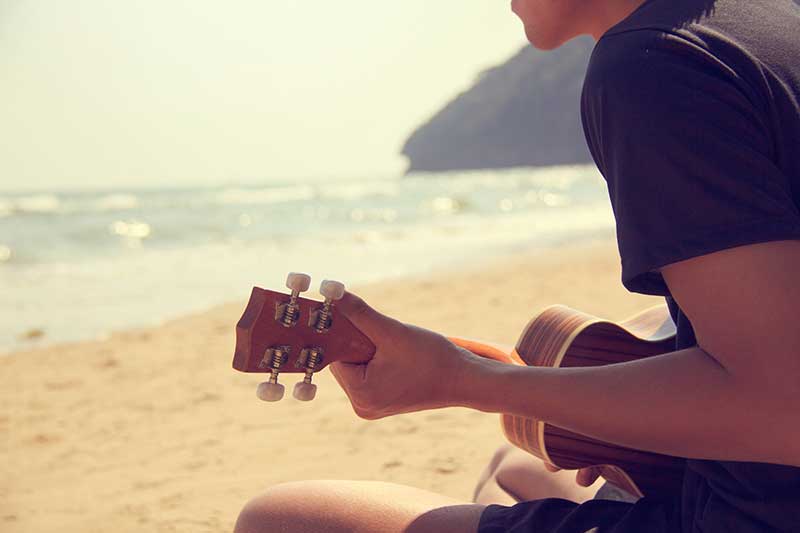 Do you ever ask yourself what instrument should I play?  You may have concentrated on sports or academics but somehow learning to play a musical instrument never happened.

The amazing thing about music and learning to play is you can do it at any age. The best way to approach this new chapter is to find an easy instrument to learn on and perhaps move on from it to the next level.  For instance learn the chords of an Ukulele and transfer the knowledge over when learning how to play a guitar.

With that in mind we have listed what we think our the easiest instrument to learn with a little extra information to help you get started.

Can I learn to play an instrument in a few hours?

There are  hundreds of musical instruments to choose from with most falling in one of the these five categories: brass, keyboard, woodwind, string, and percussion.

They all can be complicated or somewhat frustrating to learn at first. Especially if you just want to get rocking. However if you put your mind to it these instruments listed are easy to play.

Remember the sound you produce is really vibrations and you just need to organize it with elements of rhythm and harmony. The beauty of these instruments is they help you get that sound pretty quickly even in under a few hours.  Who knows you may need to setup a home recording studio to start producing music. 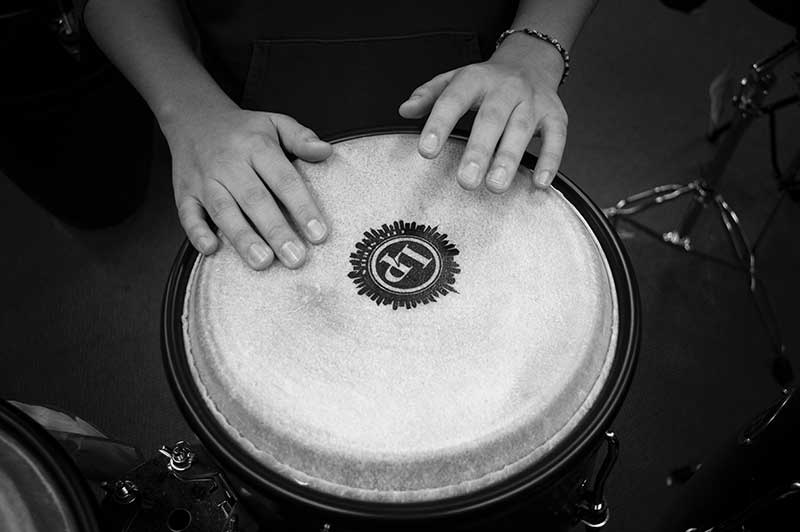 Harmonicas are the probably the easiest instrument to play.

They can be inexpensive, sound fantastic right from the start and completely portable, carry them wherever you go.  There are so many times in a day you can get a small session in which will help you get into daily practice. Just start playing with it while sitting in the park or laying on your couch.

Although there are generally three basic types of Harmonicas – Diatonic, Chromatic and Tremolo – most beginners start with a diatonic one.

Learning time before you play anything worthy: Right Away! 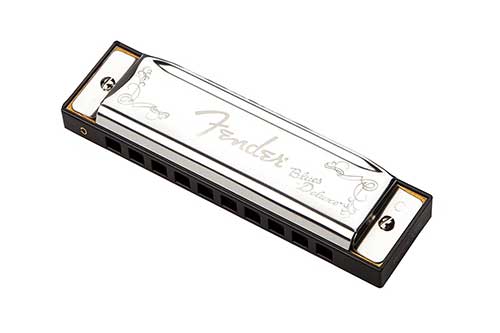 This inexpensive stringed instrument is very popular, fun to play and one of the easiest instrument to start out your musical career.

It’s also the perfect instrument, to learn how to play with if you eventually want to play guitar as you will pick up some of the fundamental skills needed to master it.

There are a variety of sizes making them perfect for a small child hands or an adult and very portable. You can pick up simple chords and be playing a song in no time as they come with 4 strings rather than a guitars six.

The 4 main sizes of a Ukulele is a Soprano, Concert, Tenor, and Baritone however in recent year smaller pocket Ukulele or Sopranissimo coming in at 16 inches (40cm)  have shown up on the market and have gained popularity.

Make sure to choose the best instrument for your hand size and the sound you want as they differ in both.

Why this is one of the easiest instrument to play is due to the fact it’s similar to a guitar but with only 4 strings and centered around the easiest key in music C Major.

However, since it tuned to the high pitched strings on a guitar, it helps the beginner learn chords and scale patterns both skills that can be transferred over to a guitar.

Learning time before you play anything worthy: 10 hours 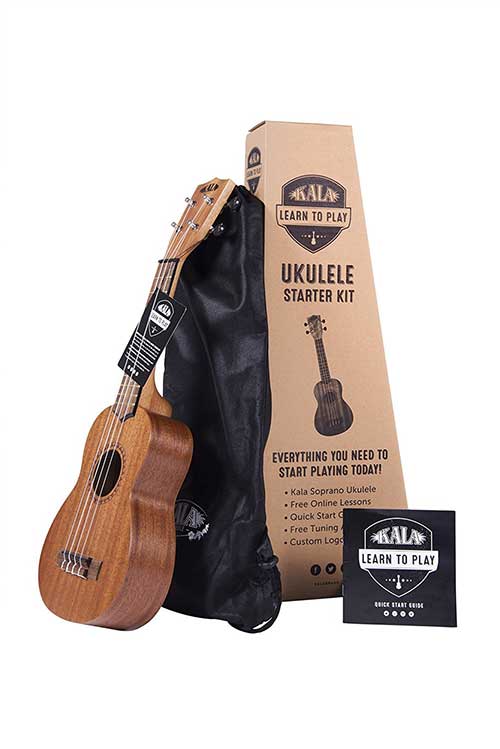 Both the Bongo and Congas are a percussive instrument that is capable of being played and sound relatively good from a newbie.   These rhythmic instruments hailing from Cuba are featured in a variety of styles of music with Latin being a favourite of course.

The Conga or Tumbadora is a single-headed Cuban drum that is tall and narrow and stands around 75 cm. The Bongos are a pair of small single-headed, open-ended drums that are connected and played as a unit. You usually hold the bongos between the knees and if your right handed the more massive drum should be on your right.  To play the Conga stand up next to it.

Although there are different ways to play these instruments, it all comes down the hands being the tool of choice.  A beginner can start playing by just tapping at the skin covering the drum and moving their hand around to produce unique sounds. Use open palms, partly closed fingers and the side of the thumb to generate a  multitude of percussive sounds. Create lower tone by tapping in the middle and higher tones by the edge.

There are a few basic strokes to playing these instruments.

Open tone (or Abierto) is played with your four fingers near the rim of the head.  You hit the edge of the Bongos with your palm and allow your fingers to bounce off the head producing a clear, vibrant, resonant tone with a distinct pitch.

Muffled tone (or Tapado) Similar to the open tone, it’s made by striking the drum with your four fingers, then resting them on the head after you hit it to muffle the sound.  Your hands should barely move and be kept relaxed.

Bass tone (or Bajo de Palma): played with the full palm on the head. It makes a low muted sound.

Slap (or Seco) is the most challenging technique and makes a loud, clear “popping” sound. This pop sound is a higher pitch than the Open stroke.  As you strike the head cup your fingers slightly to create an accent note. Once your hand contacts the drum, make sure to relax your fingers and let them bounce off the drum head.

Touch (or toque de punta): is produced by just touching the fingers or heel of the palm to the drum head.

Heel-toe (tumbao) is a Cuban playing technique where you use a single hand to create rapid successive notes which simulate the rapid beats of the snare drum.

To create the patterns flex the hand and wrist with the heel of the hand, including the large area at the base of the thumb forced into the drum head.

The fingertips come down in the “touch” note and lift the “heel” off the head. After the “heel” is raised, it can be forced into the head and the cycle repeated.

Learning time before people are up dancing with your beats: Right Away! 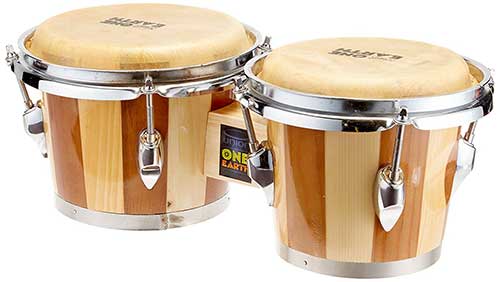 The Glockenspiel is a German word which means bell play is a small percussion instrument similar looking to the xylophone without legs. Its bars are made of steel while a xylophone has bars made of wood, with the longer bars playing a low note and the shorter one playing a high note.

They’re arranged largest to smallest Similar to a piano except that you have to hit the notes with a mallet. The glockenspiel produces a pleasant bright, sharp sound when a hard mallet is used and a more muted sound when using a soft mallet.

These orchestra bells help to develop pitched-note-reading and have a simple playing technique. Place the Glockenspiel in front of your body with the instrument at a comfortable height.

Hold the mallets the same as if you were hitting a snare drum. To produce a rich tone on the glockenspiel aim for the middle of the bar and bounce the mallets gently. 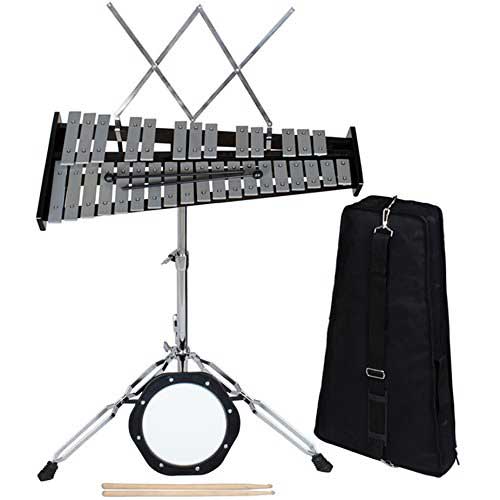 Now is the time to pick up one of these instruments and get yourself playing.  Enjoy the benefits of playing music to reduce your stress level, lessen anxiety or depression.

Playing music allows you to be more social and if you get up enough nerve to play in front of people potentially involved in the music industry or a local band.

Musicians feel happy when playing their instrument and allowing their inner voice to flow with the chords of a musical piece or playing their own song. Other benefits include discipline, perseverance and a sense of accomplishment.

Now go pick out an instrument or two and explore this wonderful world of music one note at at time.  And if you want to start a band share this with a friend who can learn to play too.